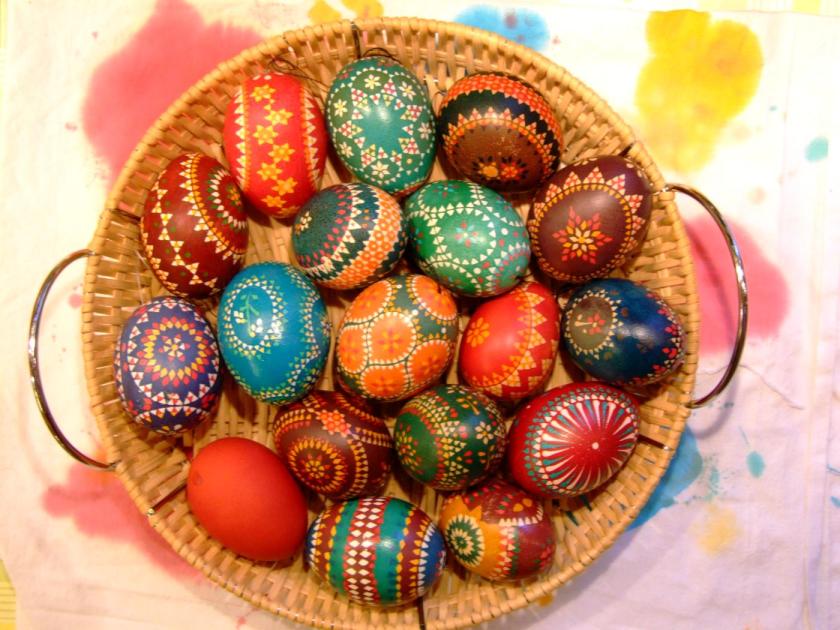 One of Poland’s most beautiful Easter traditions is pisanki, or the ornamentation of eggs. Although many of us are familiar with egg dyeing, true Polish pisanki is an art form that takes specific knowledge and practice to master. It’s a tradition that goes back centuries in Poland. The oldest pisanki were discovered in Ostrówek and date back to the tenth century.

Before getting into these art forms (yes, there’s more than one way to decorate an egg), I’d like to share with you the significance of eggs in Polish culture. As usual, there’s no shortage of beliefs and superstitions that Poles used to have about eggs.

Because the egg was associated with new life, it helped spawn the following superstitions:

Pisanki were used in many of the above superstitions, but they are most associated with Easter. After all, Easter symbolizes new life through the resurrection of Jesus Christ and was/is a monumental celebration in Roman Catholic Poland. The word “pisanki” actually comes from the word “pisać” which mean “to write” in Polish. It’s basically writing on eggs.

Here are the basic types of pisanki:

Kraszanki: These are eggs dyed in a single color by being boiled in any number of foodstuffs. Onion skins are often used as a dye, as they can produce colors like brown and gold. Beet juice can produce pink, and red cabbage, interestingly, creates a blue color.

Skrobanki: Just like with Kraszanki, Skrobanki, or drapanki, are first dyed a single color. Afterward, a sharp tool is used to scratch designs onto the egg. As you can imagine, this is a delicate art, requiring patience and a steady hand. The final product is as intricate as it is beautiful.

Batykowane: This type uses heated beeswax to create designs on an egg. After applying the beesewax with a pin (or other sharp object) and then dying the egg, the wax is removed, revealing the beautiful designs. Click here for a step by step guide to decorating an egg with beeswax.

Nalepianki: Nalepiać means “to stick” in Polish, and this style of pisanki refers to the decoration of eggs with colorful sheets of paper. This particular style originated in the Krakow area.

Pisanki is a beautiful tradition and, like with any art, there’s no particular “right” way to do it. Different regions of Poland developed different ways to express themselves in decorating their Easter eggs. Once the eggs are decorated, they are blessed at church during Święconka, or the blessing of the Easter baskets. Following this, they are usually eaten at Easter breakfast. And so, ultimately, the life-giving eggs are consumed with the hope that we will all be reborn during the Easter Season.