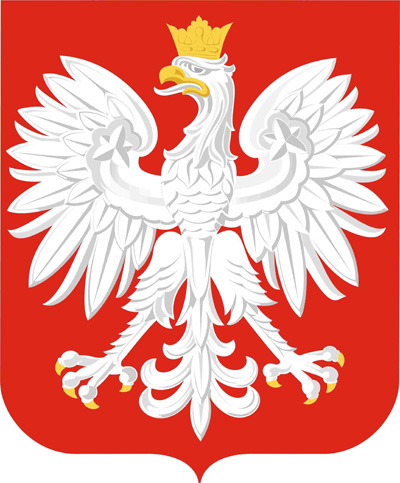 It appears on everything associated with Poland—from T-shirts, hoodies and caps, to posters, flags and shot glasses. As Poland’s official symbol, it’s among the first things that come to mind when someone thinks about that country. I am, of course, talking about the famous white eagle of Poland, or Orzeł Biały.

Legend has it that centuries upon centuries ago, Poland’s mythical founder, Lech,  was journeying across the region that is today known as Greater Poland. One evening, as he traversed that primordial landscape, he stumbled upon a large nest containing a majestic white eagle with two eaglets. As Lech approached, the great bird expanded its massive wings across the red light of the setting sun. Inspired by this sight, Lech established the first Polish city of Gniezno, meaning nest, and assumed the white eagle over the red background as his symbol.

In another version of the story, Lech desires to steal one of the eaglets and raise it for himself. The mother eagle defends her nest valiantly, however, and begins to bleed during the fight. As Lech observes the blood begin to stain the eagle’s white feathers, he is moved by its courage and dedication to its young. He immediately stops the attack and makes the white eagle his symbol, although this time the red represents blood and sacrifice.

Like with most legends, it’s impossible to say how much of this actually happened, although typically mythology is rooted in some sort of fact. For example, the famous legend of Krakow’s Wawel dragon probably resulted from the ancient Poles discovering dinosaur or mammoth bones and misidentifying them.

Known for sure is that the eagle, as a symbol, goes back millennia before the dawn of Poland in the 8th and 9th centuries. Cultures around the world have respected birds of prey for their bravery, dignity and magnificence. For the ancient Egyptians, a falcon symbolized the god Horus, while the Romans used the eagle on their battle standards during war. The eagle symbol was later adopted by the Byzantine, Russian and Prussian Empires and, of course, by the United States.

Poland’s white eagle is fairly unique, although the Poles likely chose it for similar reasons—its courage and nobility. They would have become aware of the eagle’s cultural heritage from foreign coins that made their way up to Poland from the Roman world during trade.

The Polish eagle made its historical debut on Polish coins during the reign of King Bolesław I (992-1025). Its use expanded in the 12th and 13th centuries, appearing on emblems, shields and flags. It would have represented the Poles charging into battle at Grunwald against the German Teutonic Knights in 1410 and at Vienna against the Turks in 1683.

When Poland was partitioned, or torn apart, in the 18th century, the eagle became a symbol to motivate Poles to fight and make sacrifices to regain independence. Ironically, the empires that conquered Poland—Russia, Prussia and Austria—all had black eagles as their symbols. The Polish white eagle stood in sharp contrast to this and, to many Poles, represented hope that their nation’s light would not be extinguished by the darkness of the invaders.

Regaining independence in 1918, Poland again adopted the white eagle as its official coat-of-arms. Unfortunately, the German invasion and World War II came not long after, and the eagle once more came to represent courage and sacrifice both to the Polish resistance and the government-in-exile.

When the communists took over under Soviet influence after World War II, the white eagle suffered one of its worst humiliations—it lost the golden crown that it had worn for centuries. The bare-headed white eagle represented a Poland subservient to the ruling Soviet regime.

After communism fell, the Polish eagle regained its crown in 1990 and was adopted as Poland’s official symbol, remaining so to this day. The bird appears on a red background that represents both the blood spilled to safeguard the Polish nation and the sunlit plains of the fatherland.  Its head faces right, as if gazing in the direction of truth, while its wings are fully spread out to protect all Poles and people of Polish descent, wherever they may live.