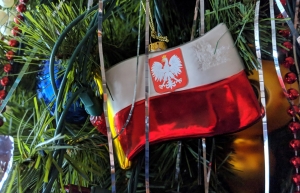 Christmas Eve in Poland, known as Wigilia, has some very beautiful traditions. Breaking the Opłatek wafer, caroling, opening gifts, the midnight mass, or Pasterka–these are practices beloved by every Pole and person of Polish descent, including myself.

But there exists a stranger side to the way Poles used to celebrate Christmas Eve, filled with mystery and superstition.

Most of these beliefs have not been taken seriously for well over 100 years. When I ask Polish people today, especially younger ones, they haven’t even heard of them.

Nevertheless, I think it’s interesting to travel back in time and study some of the odd beliefs our ancestors held. For that reason, I present to you some of the strangest Polish Christmas Eve superstitions.

Wigilia Predicts the Rest of the Year

An old Polish belief claims that whatever you do on this day will affect your entire year. If you fight with your loved ones, it’s a sign that the upcoming year will be filled with strife. If you stay fit and healthy on Wigilia, you will stay fit and healthy all year long. Lending out money or objects to others was once avoided for fear that the upcoming year would find you lacking food or other necessities.

When you consider how perilous life was in old Polish days—harsh winters, the chance of crop failures, etc.—you can begin to understand why such beliefs existed. Any form of reassurance that you would make it in one piece to next Christmas was embraced. Acting properly on Wigilia gave you a feeling of greater control over life’s unpredictabilities in the coming year.

There should be an even number of people and an odd number of dishes at supper time.

Poles used to strongly believe that at supper time on Wigilia, there must be an even number of people seated around the table or else there would be bad luck in the upcoming year.

Having 13 people was the worst scenario because the number 13 represented Judas, the apostle who betrayed Christ. Odd-numbered families would place an extra plate anyway, just to keep things even.

Interestingly, an opposing belief held that there should be an odd number of dishes served. Poles somehow believed that this would create “room” for things to even out in the upcoming year, bringing greater food or wealth.

The Spirits are Coming

Here’s where things get sketchy from a Roman Catholic perspective. Poles used to believe that spirits walk among the living on Christmas Eve. The spirits would enter your home in the form of animals, mysterious strangers or invisible entities.

As a result, Poles would be careful not to sweep the floor or dust a chair during Wigilia for fear of disturbing a spirit while it was chilling in the house.

At supper time, an extra place would be set at the table for a wandering spirit. Food and drink would be served to this “person” like anyone else. After supper, the party was over. Everyone in the house would start banging loudly on pots and pans to chase the spirits out.

The belief in spirits is probably a holdover from pagan days. In the past century, though, it has become more symbolic.

During Poland’s many wars, at least one family member was always absent. The extra spot was reserved just in case that loved one might miraculously reappear. An extra plate also symbolizes charity to the less fortunate. It’s believed that if a poor person, or someone who has lost their way, knocks on your door asking for food or company, you will already have a place set for him or her.

Toward the end of Wigilia, as midnight approached, things got bizarre as heck, or so Poles believed. This was the one night during the year that animals would talk like humans.

It’s hard to say why this belief existed, but it’s possible that animals were given an elevated status on this night because of the animals that were present in the stable during Christ’s birth.

When I was little, I had a dog, and at midnight on Christmas Eve I would always try to start a conversation with him. Unfortunately, it was always pretty one-sided.

An old rural Polish custom involved “waking up” the trees right before midnight mass. The head of the household would go outside and tie the trees around the house with straw or hay. Then, he would knock on the trees three times and shake them shouting “Do you not hear? The Son of God is born!”

For further reading on this, check out